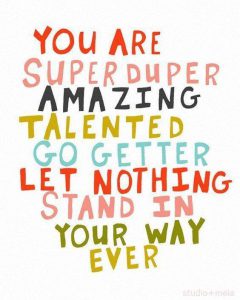 I read the TIME Magazine article FIRSTS Women who are changing the world and was struck by how many of the values of  Strong Women Action Network (SWAN) are reflected in what helped these women change the world and be successful in their professional lives. A community is one of SWAN’s values, and one of the critical elements to helping women expand their influence and support each other regardless of which issues are important to them or their chosen profession, age, race or economic status.

We strongly believe that creating a community of women across geographies is key to achieving the level of support needed to reach proportional representation at all levels of society. That is why we organized SWAN into regions and engage in regional retreats to connect women across states. I hope these quotes inspire you the way they inspired me to build community and continue to fight for what is important to you.

“We have to give each other space to be able to do what makes us feel that we are responsible and helping others, and doing what we want to be doing. We need to support each other in the lives that we have chosen. Men do not do that to each other, in terms of projecting their own ideas of weakness. Women need to take advantage of being women.”

“Every woman thinks about balance in life. Work norms make it hard for you to be active in your career, which you love and also manage the demands of family. Don’t be afraid to ask for advice, because you’ll find that there are possibilities that you didn’t know about—career structures that will allow you to build in family time, or just practical advice. One is always surprised by how much people want you to succeed.”

“You can perform as well as they can perform—or better—and you will be noticed. You have to have a continued focus and not bow to the many, many, many headwinds, but you can use them as an advantage. I say this to women all the time, particularly women who are trying to get into STEM.”

“When someone tells you that you can’t do it, especially when there are multiple people, you start to believe it, and you don’t believe in yourself. It took me about 10 years to figure out how great I was at gymnastics. You have to believe that you’re good enough.”

“Although I am not a confrontational person by nature, racism and sexism are still very much alive, and whenever I encounter prejudice, I tackle the issues and move on, refusing to be sidetracked by hate or bitterness. When I was a young poet, my work was considered “slight” by some male critics. The sexist undertone was undeniable, though difficult to corroborate. These things are subtle.”

Mazie Irono, first Asian-American woman to be elected to the U.S. Senate

“Women feel we need to be much better prepared, that we need to have a lot of experience behind us before we run for office. When I first ran for office in 1980, there weren’t that many women running for office. I had already run other people’s campaigns, all men. There were five Democratic women running for open seats in our respective states. We would campaign together—Tammy Baldwin, Heidi Heitkamp, Elizabeth Warren and Shelley Berkley. The dynamic, the visual of all these women … It really hit people at our events that this is a powerful gathering of women who could work together.”

Rita Romero, first Latina to win an Emmy, a Grammy, an Oscal and a Tony

“I’m trying as hard as I can to keep pushing the boundaries of what a woman is capable of doing. And it turns out there’s a lot we can do. There’s a lot we can speak about. The way we’re perceived is still in the ancient times, but I think we’re on our way. We now feel so strong, and that we’re entitled to feel as we do, whatever it happens to be. No one’s going to tell me how to make my own choices. For too many years, everybody told me what to say and what to do and how to be.”

Do the words of these women who became the “firsts” in their chosen fields resonate with you? Visit us at www.swan-web.org and find out how we can help you achieve your vision and connect with other powerful women leaders.